One cause of a leaking system is lead. The presence of directed structures on the shaft surface is referred to as lead and creates a conveying effect in the sealing system. This effect leads to dry running or leakage. As a result, the entire system fails. The lead on a shaft surface must be quantified by lead analysis in order to design and test the sealing system appropriately. The surface structure of the shaft is determined by the manufacturing process and must be checked for conveying effect and thus lead.

Lead analysis according to MBN 31007-7 and thread method

In the past, lead measurement was carried out with a surface profiler according to Daimler’s factory standard MBN 31007-7 or the thread method. Thread-like scoring structures that occur, for example, when the dressing helix is transferred from the grinding tool to the machined surface, can be detected in this way. The grooves can cause leaks or dry running of the seal on the shaft.

Lead measurement according to MBN 31007-7 only detects long-wave periodic structures, but not microstructures, which in many cases contribute significantly to the conveying effect of the sealing system. Microstructures have mainly been detected with the thread method up to now. Due to several factors, however, this method cannot be quantified and documented sufficiently, because it is strongly influenced, for example, by the type of thread and the fluid used in the test procedure. 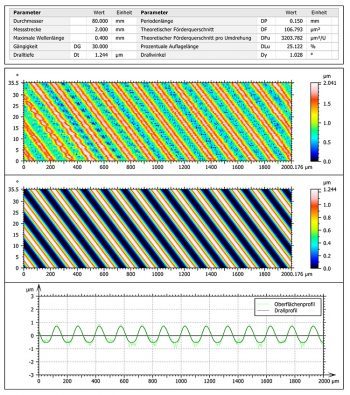 All important lead parameters can be determined by the Confovis system 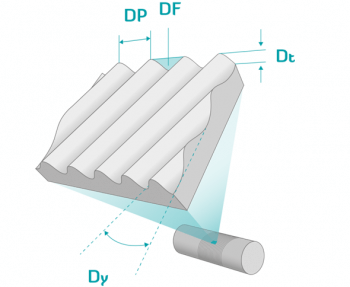 Measurement of micro lead with the method of the IMA, University of Stuttgart

For the measurement of micro lead, the LEADinspect measuring system from Confovis determines two-dimensional measurement data along the circumference and in the axial direction of a shaft and evaluates them applying the method developed by IMA. This involves feature extraction and segmentation of individual structures as well as the calculation of the relevant structural characteristics (lateral and volumetric structural parameters are distinguished).

The extraction of lateral structure parameters is performed using the binary images obtained by segmentation. In these images, the significant structures are separated from the background. An algorithm applied in image processing is used for the calculation; it best adapts ellipses to the binary structures. The volumetric structure parameters are calculated with the help of the positions known from the binary images on the basis of the form-removed and filtered surface topographies.

Measuring and analyzing lead with Confovis

LEADinspect puts the user in command of a robust, easy-to-handle measuring system designed for use in production environments. The quantitative measurement results provide clear information, and no special knowledge of measurement technology is required. After loading the specimen and starting the automatic measuring procedure for lead measurement, macro lead is measured according to MBN 31007-7 using optical profiles and micro lead by two-dimensional method and evaluated according to the IMA method.

The individual parameters obtained are summarized transparently in a clearly structured protocol. All information and raw data of the measurement are stored and are available to the user at any time. This allows further analysis, such as roughness measurement or evaluation of functional parameters, at a later point in time.