The patented Structured Illumination Microscopy (SIM) is the simplest and most robust optical method for artifact-free measurement of demanding surfaces.

In contrast with confocal methods with pinhole disc or laser, there are no scattered light effects and no coherence effects. Due to the highly dynamic nature of this method, even highly reflecting surfaces can be measured artifact-free. Even the most difficult measurement tasks such as diamond surfaces or nitrocarburized surfaces are analyzed at high resolution and 3D.

Tactile and optical measurement methods in comparison with Confovis

An optical 3D measuring method with many advantages

The patented SIM measuring method uses LED light and scans the surface topography as an area. As opposed to laser-based methods, there are no speckles  or coherence effects, so that roughness, for example, is measured and evaluated without filtration (according to VDA 2006) and traceable to the standards DIN EN ISO 4287/88, DIN EN ISO 13565 and DIN EN ISO 25178. In addition, the measuring speed is considerably higher due to the acquisition of area and is not limited by movable and mechanical components (pinhole disc or galvo mirror) as it is the case with established confocal methods. 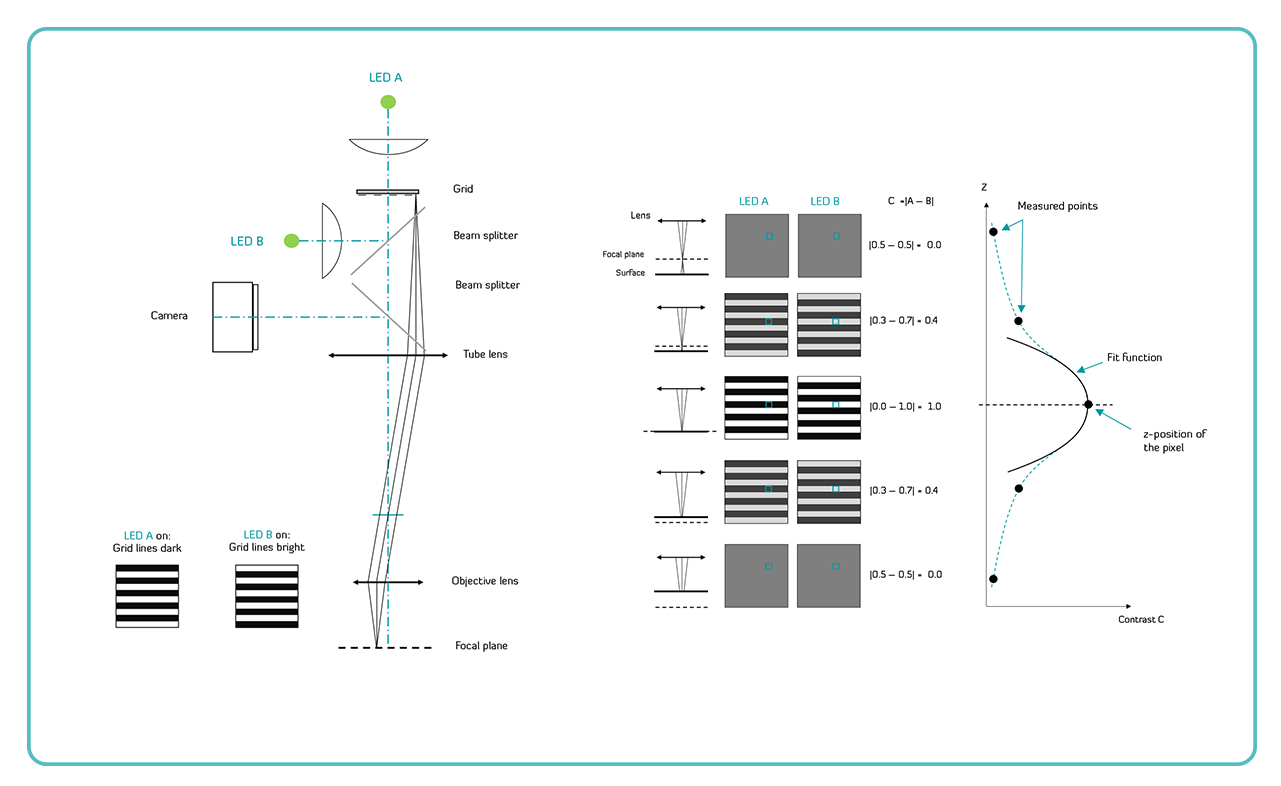 During the confocal measurement with the SIM method, both LEDs (LED A and LED B) are actuated alternately, which causes the focus to move through the topography. When LED A is activated, the grid is imaged by transmission into the focal plane (see “LED A on“). LED B is then activated and the grid is imaged into the focal plane by reflection on the chrome-plated bars using beam splitters (see “Illumination B on“). The image sensor thus captures the surface with the imaged grid, whereby two 180° phase-shifted images are generated during movement through the topography.

The measuring result is obtained by calculating the difference in contrast between the two images. A Point Spread Function (PSF) is generated for each measuring point, from which the z coordinate is determined by Gaussian fit. Subsequently, a multi-stage quality filter is applied to ensure that only measuring points of high data quality are included in the evaluation.

Extension of the optical 3D measurement method with focus variation